When I first played Hotline Miami, everything was a question and nothing seemed clear. Who am I? Why am I receiving these phone calls? Why am I killing all of these people? This seems to be the style Dennaton Games was going for when making the game. You know the basic plot points, but you don’t really know the finer details. With Hotline Miami 2: Wrong Number right around the corner lets take a look at everything you need to know about the first game before jumping into the highly anticipated sequel. (Full spoilers ahead!) 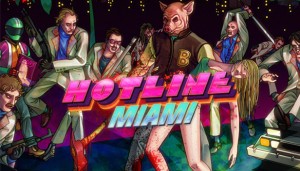 The game starts with the player, Jacket, confronted by three masked figures. One is a woman wearing a horse mask, Don Juan, who is nice towards Jacket and generally cares about his well being. It is often believed to represent Jackets girlfriend later in the game. Then there is Rasmus, the one with the owl masks, who expresses disgust towards Jacket and his actions. Supposedly represents a mobster who is enemies of Jacket. The last figure is Richard, who wears a roosters mask. Richard is very different from the two, not showing any real feelings towards Jacket, but instead asks him a bunch of questions, such as: “Do you like hurting other people?” or “Where are you right now?” These questions cause many people to believe that Richard is Jacket’s own self-conscious.

I am going to tackle this summary from its roots rather than then go through the order of events the player experiences. To start, the game revolves around an organization by the name of 50 Blessings. The purpose of this group is to break the Russian and American alliance by going after Russian Mafia members. It is suggested this group works nationally (50 Blessings, 50 states). They use people to do their dirty work for them, Jacket being one of their agents.

The game starts with Jacket getting a voicemail on his phone, telling him a package had been delivered to him. Inside Jacket finds a roosters mask and instructions to find and deliver a briefcase. After doing this and killing a bunch of mobsters, Jacket is attacked by a homeless man at the drop off point. Jacket kills him, but then proceeds to take off his mask and throws up, suggesting all of this killing was too much for him to handle. Despite this, Jacket continues to follow the instructions of the calls and doing the work of 50 Blessings.

After each job, Jacket goes to a convenience store, pizza place, bar, or video store where a bearded man working there always gives him something for free. This character is referred to as Beard, and it is suggested he had a previous relationship with Jacket.

Eventually, at one of the jobs,  Jacket rescues a girl who is being abused and she begs for him to end her life. Instead, he takes her home and cares for her. She is often referred to as Girlfriend or Hooker. As the game progresses, we see Jacket and her begin to develop a relationship and she even begins to sleep in his bed at some point.

In the middle of a mission, Jacket is called and is told to drop what he is doing and go deal with a “prank caller” at the phone company. Jacket arrives to find everyone dead, and a man wearing a motorcycle helmet (often called Biker or Helmet) searching through company files. Jacket kills Biker, who pleads “it can’t end like this”

We learn in Biker’s side of the story that he was actually looking for answers regarding the phone calls. Unlike Jacket, Bikers wanted a context of these strange calls and wanted to find the source. Before he could get any answers, 50 Blessings sends Jacket to dispose of Biker.

The next couple of missions are full of hallucinations in Jackets mind. He begins to see dead bodies everywhere he goes. Even Beard is replaced by Richter, a man who shows hostility toward Jacket. Jacket returns to his apartment after a mission to find Girlfriend dead, and the man Richter wearing a rat mask on his couch. Richter than shoots Jacket in the head, putting him into a coma.

It is strongly believed that the missions leading up to being shot where actually Jacket remembering them while in his coma, and this is why they were packed with hallucinations. It is also known that 50 Blessings sent Richter to kill Jacket. Many believe the reason for this is because Girlfriend was an accomplice to the massacres and needed to be dealt with. They knew doing this would anger Jacket and make him a threat, so they asked Richter to kill Jacket as well.

Regardless, Jacket wakes up in a hospital where he overhears a police officer and nurse’s conversation. He learns that he had been in a coma for weeks, and Richter had been captured by the police and was being held in custody. Jacket escapes the hospital, and in a fit of rage drives to the police station and murders every officer there, finally finding Richter. Richter told him the two of them were not too different, and he was receiving the same mysterious calls. The player is given the option to either kill Richter or spare him. After choosing, Jacket finds a police file that claims the calls where coming from a mansion, which happened to be the head of the Russian Mafia. This was actually 50 Blessings manipulating Jacket into continuing their work. Jacket goes to the mansion and kills the mobster boss, believing he is destroying the source of the calls, and those responsible for the death of Girlfriend. The credits rollas Jacket smokes a cigarette and tosses a photo off the balcony. 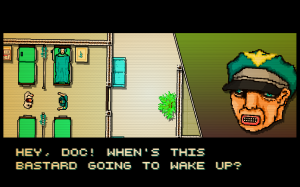 And there you have it, what seemed to be a simple game just about killing people actually has a deeper story than what you would think. Hotline Miami 2: Wrong Number will take place mostly after the events of the first, while also having some prequel missions. There are free comics you can download on Steam that tie the events of the first and second games while introducing the new characters.

We cannot wait to see where the second game takes the story and we will find out on Tuesday, March 10. Until then, crank up the soundtrack and prepare for one of the most anticipated titles of the year.

HTML5 vs Flash for Gaming and Internet