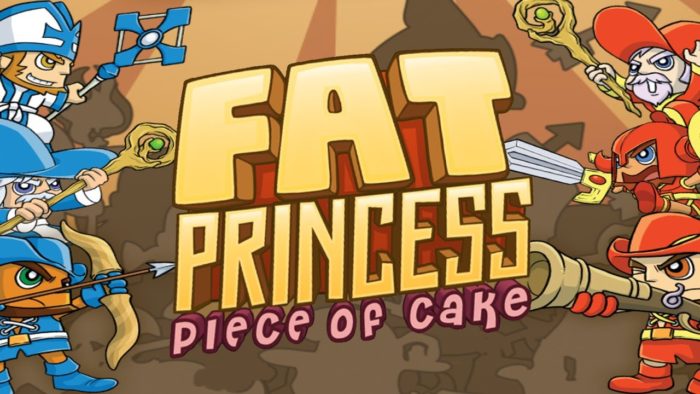 Fat Princess is a PS3 exclusive downloadable game available via PSN for $15. It’s an isometric RTS experience where you control only one unit on your team. Online multiplayer is the focus but there are A.I. controlled bots and a simple campaign mode for some fun and easy trophies.
The main game mode is called ‘Rescue The Princess’. The objective is to rescue your princess from the enemy’s base while simultaneously defending their princess in your base. It’s capture the flag with a few refreshing twists and it works almost flawlessly.

Let me start with some of the bad to get it out of the way.

There are only 8 maps, which feels a tad low. However, the levels are very unique and each has its own style. Some feature lava which rises and lowers to cover and conceal certain areas of the map, some have water hazards, others have instant death cliffs. They’re all equally fair to both teams because they’re always mirrored.

Captured outposts work as a dumping ground for harvested resources.

Online, it’s hard to jump into a game. Too many network errors and ‘failed to connect to host’ messages bringing you back to the main menu. Once you’re in a game everything is smooth, little to no lag is always welcome. I just wish there were a matchmaking and party system, that’s what updates are for I suppose.

As for classes, there are 5. The Worker, the Warrior, the Ranger, the Mage and the Priest. all are balanced besides the wizard who’s area attacks are a beginner’s best friend. It’s really annoying and unfair when you have, say, 2 warriors and an archer, and the mage is constantly freezing (thus damaging) them.

Other then that they all work great, every class has its role the player must fill for your team to succeed. Priests must be wary of their teammates health, warriors require the support of the ranged classes, workers need defenders like the warriors to gather resources. It’s this rock-paper-scissors gameplay that makes this title standout. Not only is it original, it works, something only a few IPs can boast.

There is classic team deathmatch and a few other game modes if capture the flag isn’t your fancy. You can also semi-customize your avatar, you gain new hair colors and styles depending on your performance. A new direction Fat Princess goes in is how the class system literally functions. You don’t pick a class when you die favored by many games today. Instead, you have ‘hat machines’ in your base that dispense ‘hats’ you can pick up and wear, these turn you into that class. Picking up a warrior’s helmet will transform you into a warrior complete with sword and shield, also their own stats including speed and health. Grab a wizard’s cap to gain a magic staff and robe, or snag a priest’s ornament and start healing. You can also feed your princess cake, which makes her bigger and harder for the other team to carry. You have to keep feeding her or she’ll return to her original size though. 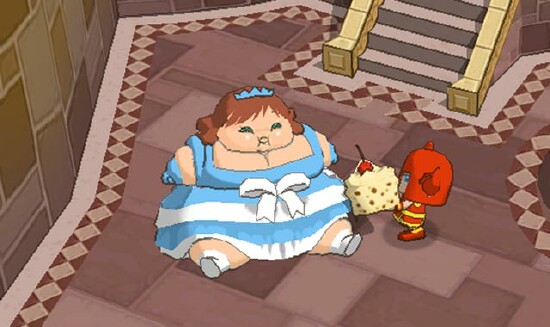 So how do these classes cooperate and what’s so RTS-like about Fat Princess? Well as a worker, you collect resources such as trees and diamonds to construct castle doors, human catapults, ladders, bridges, and your base’s hat machines, which when upgraded, give their respective class an alternate weapon or ability. Warriors get a spear, Priests can drain enemy’s health, Mages gain ice abilities, etc. This is where teamwork becomes essential, if your team neglects resources for example, you won’t have castle doors to keep the other team out of your base. Voice chat is also supported, which is a must to stay competitive. 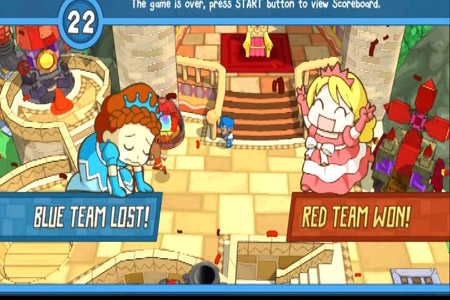 Thankfully there is a lock-on system, and it’s near perfect. Holding L1 aims your character towards the closest enemy which will also display the target’s health. This can be problematic however if you are playing as a ranged character like an archer or priest, as you cannot heal or attack anyone without moving yourself near your target.

The graphics are cell-shaded and the characters all look like they would be fitting in an animal crossing title. Don’t let that little detail fool you though, this game can get pretty gruesome. Bombs will go off leaving nothing left but a pool of blood and a few empty hats on the ground. It gives Fat Princess a certain charm, the game has quite the quirky sense of humor.

There is room for improvement here, but Fat Princess is well worth the $15 price tag. If you’re an action fan who fancies some strategy, you’ll feel right at home. Fat Princess’s flaws are easy to look past and once you do that, you can enjoy a truly fresh take on video games.