Every Nintendo system brings with it a few givens. A new Zelda, a few Pokemon titles, a regularly delayed Smash Brothers. One more staple in the grand pantheon of Nintendo’s greatest comes in the form of Mario Kart, and the multiplayer quality it has continued to represent throughout the years. 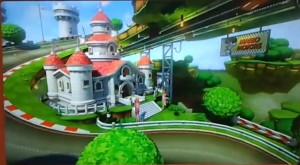 Mario Kart 8 was announced at E3, and Nintendo fans greeted the expected announcement with expected fanfare. Mario Kart maintains a unique individuality in every generation of gaming, much like Smash Bros, as it always sees a single release on every system. Needless to say, Mario Kart is always met with a ton of excitement, as it always lands acts as a regularly revisited game throughout any systems lifespan.

Nintendo has so far, only released minor information about the title, along with a teaser trailer detailing one of the main hooks of the new title. MK 8, while retaining many of the past charms of MK titles gone by, is going to feature gravitational based gameplay. This could translate to a number of unique raceways, much like the half upside down raceway featured in the initial trailer. Some new gameplay has emerged, coming out of Madrid’s Game week, which is a hidden gem of game conventions.

The demo featured shows us a couple of key features. Firstly, we reaffirm the gravity-based gameplay, as the racers are upside down halfway throughout the course, creating a cool sense of level design and visual pop to the racers. Considering power sliding is guaranteed to make a return, and this new gravity focus has presented itself, I will now take this moment to dub upside down power slides as “gravity slides,” because it sounds really cool.

You can keep that one for free, Nintendo.

Secondly, the motion controlled-based gameplay makes a triumphant return,  with gamers being able to use either the Wii U gamepad or Wiimote (with steering wheel of course), to control their karters on the raceway. It looks as if bikes from the Wii version, and the flying mechanics from the recent DS title, have also made a comeback.

The graphics are proper HD, which makes this MK entry look miles more fantastic than past iterations. The HUD and menus look very clean, if not overly simplistic, though may represent only a beta of what will be in the final product. The racers unlocked from the start (or at least in this demo) are predictable entries into the eight installment, and may act only as a possible third of the entire racing roster.

Following some logical speculation, I will deposit the following. MK7 featured a number of new racers, like Rosalina and Dry Bones Bowser, who are likely to make re-appearances. The Mii’s were also hidden characters from MK Wii, and are very likely to make a return as well. MK 8 will likely have an online component at least as extensive as MK7, and will probably feature 8 circuits with four races a piece, four circuits will be brand new, and four will represent retro courses visually upgraded for MK8′s inclusion.

If nothing else, the gameplay looks as smooth as ever, and will be a must-have title, when it finally hits store shelves (right now slated for early 2014). Take a look at the gameplay below. 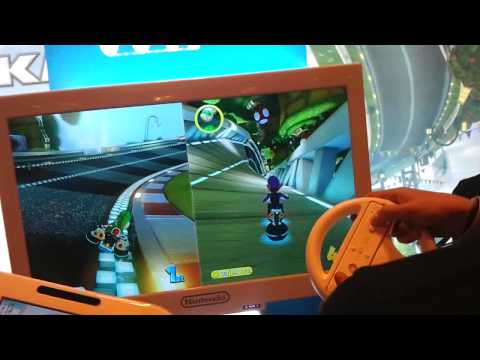