[Welcome again to Video Game Crafts ‘N Gear! This is a weekly feature wherein I shine the spotlight on three of the best custom-made, video game-inspired projects I’ve come across this week. Whatever the game and whether it’s art, crafts, toys, cosplay, animations or anything creative, if it’s awesome enough I’ll share with you wonderful readers!]

Halloween may now be over, but that’s not to say we can’t still celebrate the occasion with the artistic talent of the internet. Instead of going with the traditional scary-faced Jack-O’-Lanterns, many creative minds took the opportunity to instead carve their pumpkins with some gaming-related inspiration. Pokemon featured prominently in the thousands of awesome carvings, and it’s no surprise–Pokemon X and Y has fans more excited than ever, and that passion will be burning (literally, if you read on) for quite some time. And after all, a franchise based on hundreds of battling monsters sounds like a perfect fit for Halloween. So, welcome to the Pokemon Pumpkin Halloween Special!

Let’s start off huge: how about the clash of the two new legendary Pokemon? In this highly detailed pumpkin, Chris Fox (@KinKitsune on Twitter) carved Xerneas and Yveltal standing their ground, undoubtedly preparing for a battle of titans. The Pokemon are incredibly accurately drawn, which is no small feat when you’re not using your standard pencil and paper. He has also achieved difference shades of light perfectly by using different level of depth in the carving. Also, check out Pikachu and Vulpix squaring off at the bottom!

Now it’s time to go back to the beginning. Back when you faced your first huge dilemma as a child: Bulbasaur, Squirtle, or Charmander? Well, looking at these pumpkins by Andrew Layton (@monomania247 on Twitter), I feel as though I’m able to make that decision quickly and maturely: I’ll have them all, thanks.

This set of four features some very familiar faces, with the classic starter Pokemon from Red, Blue and Yellow. Instead of carving, he has decided to paint the huge fruits, turning them into heads of the companions that joined you at the beginning of your adventure. The designs are simple but the colours are superb.

And what happens when you evolve those cute little creatures? It goes a little something like this. To end this special, I had to go with the most creative use of a Jack-O’-Lantern I’ve seen. The silhouette of Charizard alone is very striking, but as you can see that’s not the extent of the creative genius here. Using some clever design, the dragon-like behemoth is breathing fire at velocity from the top of the pumpkin. Sadly we don’t know the name of the creator, but we do know it was 9GAG user ohhjay who shared this image with us. Kudos for getting a photo in time–it looks like that Fire Blast is super effective enough to engulf that entire pumpkin in seconds. 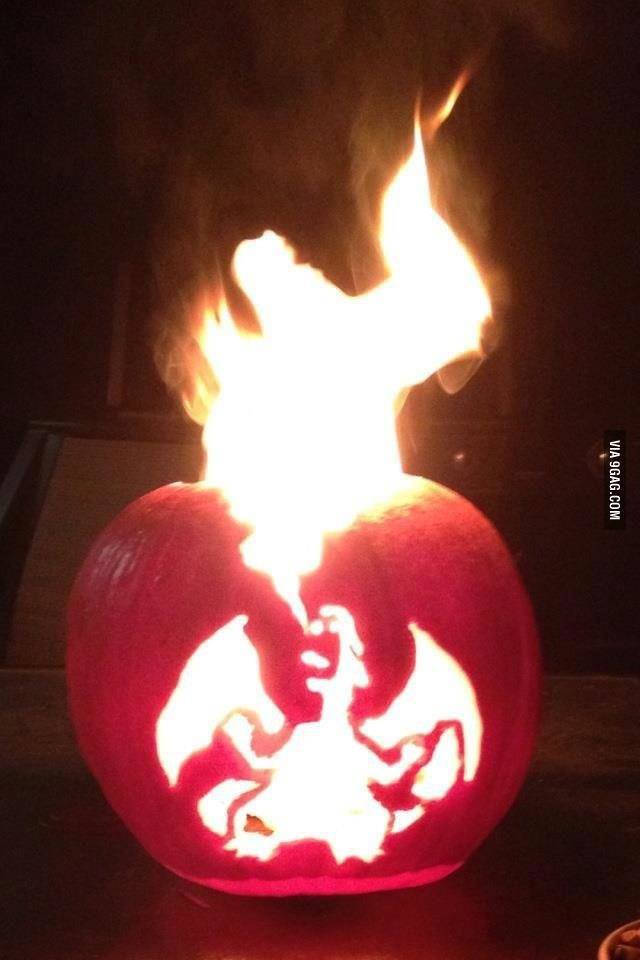