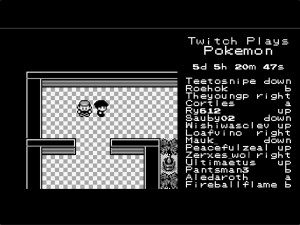 In an ongoing act of hilarious insanity, a Twitch channel involving the classic Nintendo Gameboy games, Pokémon Red and Blue, is currently being streamed and played live.

By thousands of people.

Starting about five days ago, “Twitch Plays Pokémon” began as a makeshift video game social experiment, which proposed that the random anonymous of the internet, collectively try and play through the original Pokémon game. This is accomplished through some basic programming; the game itself responds after any user has input a valid command into the chat, which then produces the corresponding movement on the screen. With thousands of people coming and going, lag to contend with, trolls sabotaging, ineptitude, stupidity, the pure hearted and the insane all putting in their two cents about how the game should be played…it’s not going well.

The current game session is at hour 126, and the collective anonymous have made it all the way to the first Team Rocket hideout (under the casino). Watching the stream is like staring into the mouth of madness…do it for too long and ye will surely die. I suppose the fact that they’ve made it as far as they have, especially considering how belligerent of an attempt this has actually been, is somewhat impressive.

Obviously, grievers were inevitable, as the internet has no shortage of sadists in its virtual midst, but the tried and true continue to push on badge after badge. I am slightly surprised at the level of mass incompetency, with the player (Red) moving in circles, sometimes for several hours, exposing the levels of broken teamwork at hand.

I’m more curious as to whether or not the technical limitations of Twitch (I.E The Lag) are affecting the gameplay more than player mischief. Regardless, it is entertaining (if not equal parts mad) to say the least. I initially ignored posting about the story, wrongly assuming it to be a flash in the pan, but it seems as if on some level, this is a legitimate effort to beat the game. If nothing else, this communal playthrough of Pokemon, is an easy reminder of The Infinite Monkey Theorem, and how in the grand scheme of things, it seems impossible for them not to indeed, eventually beat The Elite Four.

And to those of you wondering if my headline was in fact a typo. It is not….Mankey is a monkey Pokémon from Gen I, and I thought it appropriate to appropriate The Infinite Monkey Theorem, by adding a touch of Pokémon class to it.

It seemed fitting, given our currently “impossible” circumstances.

Help the stream beat the game by joining in on the madness.  Hopefully, you can help them enter the Hall of Fame sooner than later.

Rumor: New Pokemon Games Already In Development, Codenamed Plus and Minus