Time Gentlemen, Please is a game with a racism slider. 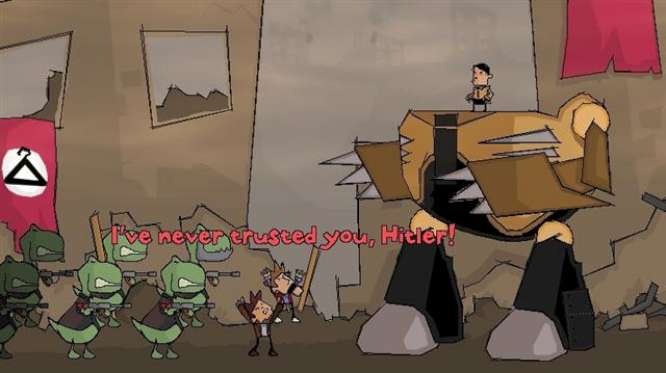 Use ‘Childish Sense of Humour’ with ‘Satisfyingly huge library of jokes’

Time Gentlemen, Please is a point-and-click adventure game where your inventory will simultaneously feature a skeleton arm dipped in Hitler’s bloody fetal matter, glasses stolen from a Neanderthal geek, and some condoms. It follows (very closely) in the grand tradition of the classic Lucasarts adventure games now seeing a resurgence.

Except with more jokes about gentlemen’s special parts.

Time Gentlemen, Please is a very funny game- providing you find a mix of naughty words, meta-jokes about being a game and general inappropriate humour appealing. I do, and that’s where this review becomes tricky. It’s impossible to separate Time Gentlemen, Please as a game from it’s jokes. 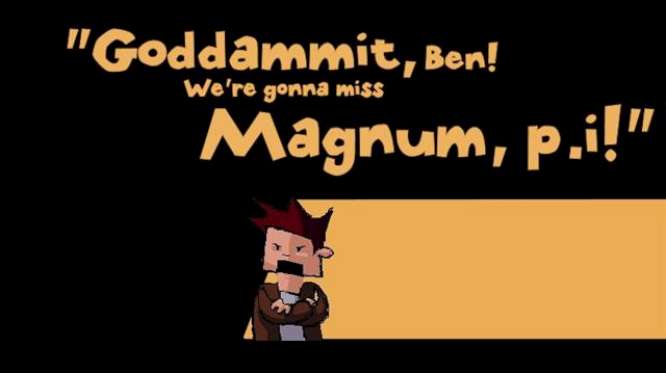 In this game’s predecessor, Ben There Dan That!, the game was entirely the jokes. It was a competent but never particularly innovative or satisfying series of puzzles, sticking to the formula laid out for it by the Lucasarts classics the Zombie Cow boys so clearly idolise. It was the perfect gaming equivalent of an Austin Powers film, or an episode of Family Guy– the plot was silly and the entire game only really there to serve the humour, fortunately very well-written.

Luckily, Time Gentlemen Please expands on that, becoming one of the most varied & complex point-&-click game I’ve ever encountered. Its much smoother, with multiple locations easily reached by a map, smaller games within the game, and time-travelling logic puzzles. Its not quite on the level of Day of The Tentacle’s genius one location split over three time zones, but achieves, with reasonable regularity, the rare feat of organic ‘aha’ moments, an sudden clicking of (sometimes wonky) logic that is satisfying, and unique to the genre, without too many sideways logic leaps (although I’ll admit to using this friendly soft-walkthrough 2 or 3 times).

Still, the funny is the reason to play. If you’re wanting to click on every object with every possible verb- which is really the only way of playing, as almost every combination yields a unique result, and many of the best jokes are hidden behind obscure combinations- the game lasts around 8 hours. Played, as I did, in short, pre-bedtime bursts, the effect is similar to buying a Simpsons boxset, with a similar success rate of laughs. 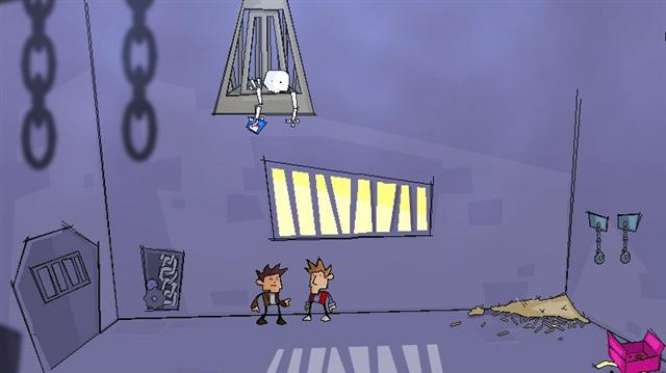 There’s very little reason to not buy this game:
-Its predecessor, Ben There, Dan That! is available for free, and should give you a good idea of whether you’ll enjoy their particular brand of humour. Think of it as a lengthy demo to test whether you’re going to love this game (hint: you will.)
-Time Gentlemen, Please is available for the measly price of £2.99/$5ish.
-Your purchase will come with a sweet funny little email that gives you that ‘helping out an indie studio’ fuzziness inside. And save all our souls before we pour money into the pre-Christmas evil-corporation money machine.

But, most of all, it’s a damn fine game and very funny, in a medium almost devoid of true comedy games. I’m biased- it made me laugh – but that’s a fine reason to love something.