The full character roster for Mario Kart 8 has been leaked online through an off screen image that surfaced online a mere a few hours ago.

The image shows off the character selection screen. Judging from the image, it’s clear how there are going to be thirty playable characters in the game. 27 of them can be clearly identified, while three indicated by just a question mark

There are no news on who the characters could be. They could be taken from older Mario Kart games or couple be completely new characters to the series. We will let you know about them as soon as more confirmed news come in on the matter.

Several Mario Kart 8 gameplay videos emerged around two weeks ago, showcasing all the tracks included in the Mushroom, Flower, Shell and Banana Cups. The videos that surfaced do an easy job of reminding us of how gorgeous Mario Kart 8 is shaping up to be. Needless to say, avoid taking a look at the videos if you want to be surprised when the game launches in about a month, but if you aren’t worried about spoilers, than I’d thoroughly recommend taking a look at some of the vids available.

Mario Kart 8 will launch on Wii U at the end of May in all regions. Make sure to keep following us for all the latest Mario Kart 8 updates. 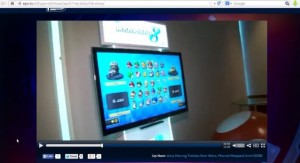 Rumor: New Pokemon Games Already In Development, Codenamed Plus and Minus