Titanfall released yesterday in North America for PC and Xbox One. After a few weeks of fanboy wars and yet another resolution gate controversy, it was time for one of the first blockbuster games being released on Xbox One and not on competing home consoles to finally hit store shelves.

As usual, there was no way that an exclusive game, especially a third-party one, could release without angering some overly sensitive gamers. “Severe frame rate problems make it unplayable at times and the dreadful constant screen tearing can be unbearable, said Metacritic user davd. Fighting in the Titans makes the game run slow and the visuals are so bland coupled with a dire 792p resolution”. He ended his heartfelt review by summing up his thoughts on Titanfall in two words. “Bad game”, concluded davd. He reviewed the title as honestly and objectively as he could by showing no mercy, scoring it a zero out of ten. Davd has only submitted one other user rating to Metacritic. He gave PS3 exclusive The Last of Us a perfect score, ten out of ten. 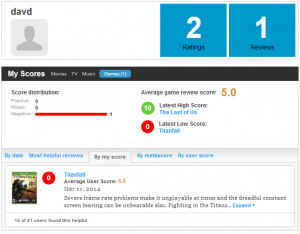 Davd is a brave soul. He is one of gaming’s keyboard warriors. These people take to websites like Metacritic or Amazon when new games don’t release on their system of choice and rate them poorly. Because of audacious gamers like davd, Titanfall currently holds a 6.0 user score on Metacritic based on 862 ratings. Its score was as low as 3.4 on Tuesday morning.

Look, I think that it would be great for games enthusiasts to be able to only buy one system and have access to every single piece of software that hits the market. Unfortunately, that isn’t the case because the games industry is exactly that, an industry. Each company wants to have the commercial edge and will spend a tremendous sum of money to ensure that its product is more desirable than its competitors’. In the video game hardware industry, this edge can be acquired by pricing systems fairly, marketing them properly and, most of the time, by funding or supporting the development of compelling, exclusive software. What’s great is that competition improves the quality of the software found on each console because of the fact that, as said earlier, the big three hardware manufacturers are all trying to come out on top.

In Titanfall’s case, Microsoft made a business deal with EA to have it published only on their home consoles and PC, so PlayStation and Nintendo-only gamers would not be able to play it. It doesn’t mean, though, that just because they’re bitter about missing out on Titanfall that “Metacritic-bombing” it is acceptable. I mean, we’re talking about video games. Who cares if you weren’t able to pick up Titanfall? It’s just a game, a source of entertainment amongst many others. There is no point in trying to convince yourself and the rest of the Internet that it’s a terrible game. If it is, people who’ve actually experienced it will voice their displeasure and the game in question will get a bad reputation on its own. There is no need to bring it down to defend your console of choice, because its manufacturer doesn’t care about you. You’re just a walking, talking wallet amongst millions of others to it, and if you miss out on something at some later point in your life, it won’t be there to have your back and encourage you.

You’re mad because Titanfall didn’t make it to PS4? Buy an Xbox One. You’re irritated because Deep Down can’t be played on Xbox One? Buy a PS4. You absolutely want to get your hands on Bayonetta 2 or Monster Hunter 3 Ultimate? Better pick up a Wii U. It’s just the way the games industry works and having exclusive games benefits all of us in the grand scheme of things. Maybe we should try to not only be accepting of games releasing on consoles we don’t own, but be happy that the quality of one system’s exclusive software library will push other consoles’ manufacturers to improve theirs. And hey, buying another console is also always an option, and it will save you the frustration of missing out on games that, deep down, you actually want to play.

The views and opinions expressed in this page are strictly those of the author and are not necessarily the views or opinions of gamersyndrome.com, its sponsors or associates.