The most long-awaited game of all time, Half-Life 3, has finally been confirmed today as being in development.  Half-Life 3 is being developed by series spearhead, Valve, however EA will publish the anticipated title after purchasing the Half-Life franchise from Valve today.

EA has also released details about Half-Life 3’s story, explaining how we will not see Gordon Freeman, the protagonist of the previous Half-Life games, in the game at all.  Instead, the game will focus on a brand new cast of characters that will be in no way related to the characters in the previous games.  Gamers can also expect a 32-player multiplayer mode for Half-Life 3 which will consist of “heavy FPS-generic matches” and “COD-like gameplay”.

With this announcement, EA and Valve have promised a slew of DLC releases scheduled after Half-Life 3’s release, beginning with a Day One DLC on release day that will be around $22.  EA also plans to reincorporate their infamous Season Pass system for Half-Life 3, which they disbanded for all EA titles last year. 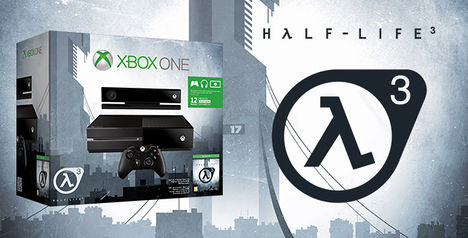 With this news, Microsoft has unveiled an Xbox One Half-Life 3 Bundle which will include a Half-Life 3 themed Xbox One console and controller with the game itself, being priced around $299.

Half-Life 3 will appear on both next generation consoles late 2015, however we will not see the title reach PC, Ouya, or the Steam Machine until mid-2016.

Are you psyched for the next Half-Life?  What do you feel about EA taking the reins on Half-Life?  Let us know down in the comments below!