Brace yourself Meat Gear fans…we may or may not be very happy/unhappy about something.

Bear with me for a second.

In a recent Twitter conversation involving his apparent ongoing “non-involvement” in the upcoming Metal Gear Solid game “The Phantom Pain”, David Hayter responds to a fan’s inquiry in a very bizarre manner, as seen below. 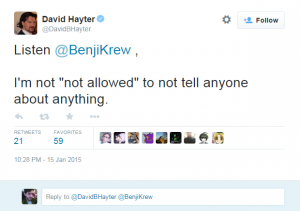 This awfully intentional piece of trickery helps to obfuscate whether or not David Hayter will indeed reprise his role as Solid Snake in The Phantom Pain. While Hayter has voiced iconic video game character Solid Snake since Metal Gear Solid’s release back in 1998, and every subsequent release for well over a decade, fans were shocked when they discovered Kiefer Sutherland was taking over the role of Snake in MGS V.

Hideo Kojima, creator and main producer of the Metal Gear Solid franchise, is well known for publicity stunts involving his games, MGS being no exception. He purposefully concealed Raiden from players leading up to the release of MGS2 for a multitude of reasons and even pretended to be a man named Joakim Mogren to trick fans into thinking The Phantom Pain was not an MGS title. While all of these tricks are in good fun, Kojima knows they make fans go insane trying to figure out the truth of the matter, and this recent series of events in denying Hayter’s involvement in the new games maybe just one more trick up his sleeve.

Hideo Kojima is scheduled to be at the Taipei Games Show On January 31st. While it is very unlikely they will let the cat out of the bag on whether or not Solid Snake will be in The Phantom Pain, and if David Hayter will be voicing him, many a fan excitedly await for a final confirmation on a final release date.

Until then, we are only left to ponder. 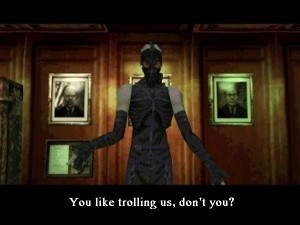